The discovery of a stone tool representing a typical Mousterian tool confirmed that the site of Barać Caves in the municipality of Rakovica hides the remains of the material culture of the Neanderthals. 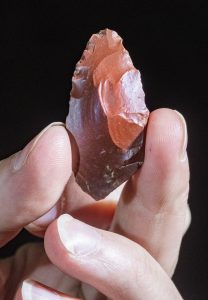 Encouraged by the great find, further research was initiated into the entrance part of Upper Barać Cave in collaboration with the Ministry of Culture, the Ursus spelaeus speleological club, the University of Wyoming and the University of Oregon from the USA. Research is taking place from June 27 to July 15, and all visitors of the Upper Barać Cave are allowed to attend the research as part of a regular tour! 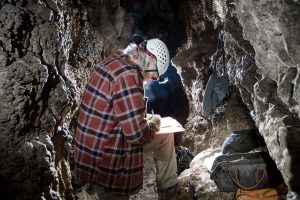 This is a unique opportunity to learn more from the field researchers and ask the questions you’ve always wanted to know about Neanderthals and their way of life.

Cooperation with well-known universities from the USA has been ongoing since 2013, and so far, four joint archaeological, anthropological and paleontological research projects have been carried out, during which more than 100,000 different remains of animal bones from the Ice Age were found, belonging to animals that lived in these areas more than 50,000 years ago!

The cooperation in 2022 continues with the aim of finding additional evidence of Neanderthal life in Upper Barać Cave. While landscaping the entrance part of Upper Barać Cave, a stone tool was found that looked different from the other finds at the site, which gave the impression that it was a rare and completely new finding. The tool was found next to the toe (phalanx) and tooth of a cave bear from the Pleistocene, when Neanderthals lived in these areas at the same time. 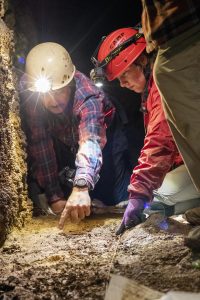 Participants of this project are Krešimir Raguž, a graduate archaeologist from the Ministry of Culture, Nataša Cvitanović, Hrvoje Cvitanović and Natalija Sudar – speleologists from the Ursus spelaeus speleological club in Karlovac, under the supervision of Dr. Rick Weathermon and archaeologist Eli Mrak from the University of Wyoming, as well as 13 students from both American universities. In addition to the search for Neanderthals, there are also archaeological investigations of medieval finds from the time of the Ottoman invasion of these areas and anthropological investigations of human remains in caves.

The specific goal is to research the layers in which the Neanderthal tool was found in order to confirm the activity of Neanderthals and find out to what extent they were present in Upper Barać Cave.

Upper Barać Cave is open to visitors every day from 9:00 a.m. to 7:00 p.m., and you will be able to participate in the research from Monday to Saturday from 9:00 a.m. to 4:00 p.m. During the guided tour, visitors stop in the first hall, where they have the opportunity to talk with the researchers and follow the progress of the excavation of the probe by the minute. This unusual experience, which will enrich your visit to the cave, is included in the regular ticket price. 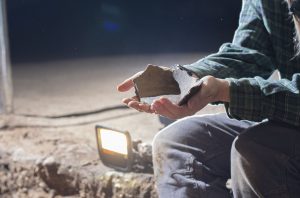 Avoid the summer heat by staying at 9 degrees Celsius and find out with us what else is hidden in the darkness of the past!