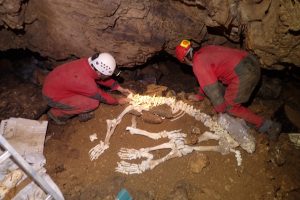 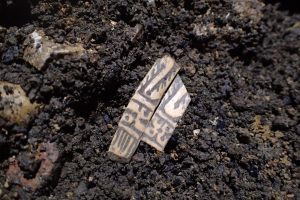 The first records on archaeological research in Barać Caves date back to 1877, which was when Upper Barać Cave was visited and explored several times. It is likely that certain objects of exceptional value, which could have provided better insight into the events around the cave and inside the cave itself, were removed from the cave during this period. Several years later, Mijo Kišpatić conducted his own research and, in 1880 and 1885, presented an overview of the findings of his work. He mentioned a great number of bones, most of them of animal, but some also of human origin, while he bestowed less attention upon pottery finds and other objects. He remarked that, prior to his research, the cave had been thoroughly dug up and that some finds had been donated to the National Museum in Zagreb, while others were located at the Municipal Council of Rakovica. Among these finds, special mention should be given to the bronze bracelet from Upper Barać Cave, which was donated to the Archaeology Department of the National Museum by Anton Culek, PhD in 1912. With its typological characteristics, this object corresponds with the period of the Early Iron Age, most likely the 8th or 7th century BC. The rest of the objects that were safeguarded in Rakovica disappeared without a trace in the early 20th century. It was only several decades later, in 1959, that academician Mirko Malez reinitiated archaeological research, with an emphasis on paleontological remains. Likewise, the great majority of scientific and popular magazines made only a passing reference to the finds themselves, rather focusing on the great number of human bones and deducing that they most likely dated to mediaeval times. 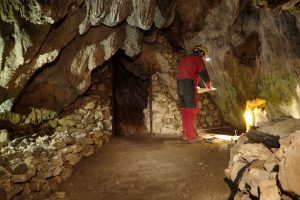 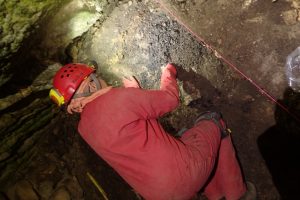 It took more than one hundred years for the first systematic archaeological research to be conducted. In the process of restoring the cave for tourism-related purposes, in 2004 a team of experts from the Archaeological Museum in Zagreb (Sanjin Mihelić, Jacqueline Balen, Ivan Radman Livaja) conducted the first preliminary studies in line with the advice provided by the speleologist Hrvoje Cvitanović and the archaeologist Krešimir Raguž. The objects found during these protective excavations largely consisted of fragments of ceramic vessels, together with a few pieces of metal and stone. The pottery appears to have been intended for everyday use, and the craftsmanship is mostly rough and sloppy. It dates back either to prehistoric times, i.e. the Late Bronze Age or Early Iron Age, or to a more recent period. Preliminary analysis of the prehistoric pottery fragments also indicates dating between the Late Bronze Age and Early Iron Age, though a broader timeframe also cannot be excluded.   Superficial inspection of the cave is enough to reach the conclusion that it was used as a dwelling place (at least temporarily) during the past three millennia. The stratigraphy of the cave and the well-preservedness of the bones of the Pleistocene fauna from the deeper layers indicate conditions that are favourable for preservation, which means that thorough research could yield traces of human habitation of the cave – naturally, providing that such traces existed at all.     These first protective excavations of Upper Barać Cave confirm its status as an interesting archaeological site with great potential for further research. Under these assumptions, Upper Barać Cave was, in 2013, included in the fortified cave project of the caving club ˝Ursus spelaeus˝ from Karlovac and the Ministry of Culture of the Republic of Croatia, as this cave is one of about a hundred in Croatia in which the people built and adapted fortifications and in which they hid from the Ottomans. During this project, all finds and find documentation were precisely documented, as were the fortifications in Upper Barać Cave themselves. In cooperation with the Ministry of Culture, the University of Zagreb and the University of Wyoming (USA), systematic research of this locality commenced in 2013, involving the participation of: Krešimir Raguž, Hrvoje Cvitanović, Kazimir Miculinić, Nataša Cvitanović, Neven Šuica (˝Ursus spelaeus˝ caving club), Iva Perković with her colleague Boris Olujić from the History Department of the Faculty of Humanities and Social Sciences of the University of Zagreb, James Ahern and Rick Weathermon (University of Wyoming, USA), Rory Becker from Eastern Oregon University (USA) and their Croatian and American students. Since then, Barać Caves have biennially been hosting an international campaign that continues upon this research and which has, in addition to previous analyses on this locality, also introduced the analysis of stable isotopes, which can be used to determine the spatial origin and movement and diet of the inhabitants that met their untimely demise in Upper Barać Cave. After research and spatial analysis of the remains, it seems likely that a hypothesis on the deaths of a greater number people inside the cave can be made. Was this due to a tragedy caused by the lighting of a fire, as the finds in the front part of the cave suggest? Were these people locals (analysis of radioactive isotopes), and were they related by blood (DNA analyses)? This is yet to be shown by future research and analysis.